BML Munjal University (BMU)BMU BlogArticlesGMAT vs. MAT – What is the Difference?

GMAT vs. MAT – What is the Difference?

MBA or Masters in Business Administration is the new trend today. Each year, many students attempt the Management Aptitude Test or MAT and Graduate Management Admission Test or GMAT to get into the country’s best MBA institutes.

Though both the entrance tests are conducted for admissions in the MBA colleges, there are some specific differences.

MAT and GMAT are conducted each year on different dates and schedules. Based on the score gained in the entrance tests, the candidates can gain admission in their desired colleges for the MBA programs.

But it is quite common that many candidates get confused between both the entrance tests and do not understand which one to prepare for.

One of the best ways is to understand the difference between both of them. Here is a detailed discussion on GMAT vs. MAT so that you can make the right selection.

Before getting into the discussion of which one to go for and which is better, it is good to understand both the exams’ basic differences.

● The Test and Syllabus:

MAT can be online and offline tests. The candidates have to prepare in Quantitive Aptitude, Mathematics, Logical Reasoning, Data Analysis, General English, General Knowledge, and similar.

If you are appearing for the GMAT, it is an adaptive computer exam. The test is focussed on Analytical Writing, Quantitative Reasoning, Integrative Reasoning, and Verbal Reasoning. 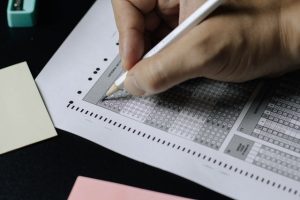 MAT is a national level test. This means, if you are appearing for the MAT, you will be able to fetch admission in different best management colleges within India.

GMAT is an international level test, cracking through which you can get a chance to get admission in some of the best management schools and colleges across the world.

There are some dedicated schools and colleges where you can apply for your admission after you have cracked through the GMAT.

So how do you take admission in your desired MBA college after you have cracked MAT? You need to get the preparations done since you have filled your form for the MAT itself. Here are the steps that you need to follow in choosing and getting admission after MAT.

Step – 1 – Select five institutes from the list provided while filling in the MAT form.

Step – 2 – Prepare for the entrance test well and appear for the exam.

Step – 3 – As soon as a result is announced, the selected institutes will send you an invitation for the next proceedings if you have scored well. In some cases, it can be a direct admission. In contrast, in some other cases, it can be an interview or some other selection process.

Step – 1 – Appear for GMAT and crack through the exam. Experts consider a score of 750+ to be a fairly good score to get into a good institute.

Step – 2 – Now, you need to start hunting for the institutes to get admission with the GMAT’s help. In fact, you can do this research before your GMAT too to shortlist some of the institutes.

Step – 3 – Start applying to the selected institutes with your GMAT score.

Step – 4 – The institutes will contact you with the next admission steps if they seem you to be eligible for the MBA education in your institute.

The Difficulty and Convenience Level:

When you appear for GMAT, you don’t need to be taking admission in an institute outside India. Many candidates crack through GMAT and then take admission in the best Indian institute.

Thus, MAT and GMAT both are ideal for taking admission in an MBA school. But there is a difference in the case of the difficulty level of the test.

MAT is considered easier than GMAT in terms of the syllabus that the candidates need to cover. Also, it is conducted 4 times a year. Thus, you have four times of chances to crack through the exam in a year.

Once you have cracked the MAT, the score is valid for one year so that you can finalize the right institute within this period among the five options that you selected during the filling of the MAT form.

In comparison to MAT, GMAT is considered much tougher when it is about the syllabus. GMAT is almost similar to the CAT in terms of difficulty level.

But some other factors make GMAT much convenient than MAT. You can appear in the GMAT exam during any business duration throughout the year about 5 times.

You can even appear for the exam with a minimum gap of 16 days from the last exam in which you appeared. Also, the score of GMAT is valid for as long as five years. So, within this five-year tenure, you can apply for different institutes and get admission to an institute you desire.

Benefits of Appearing in the Test

Both MAT and GMAT offer you the option to get admission to India’s best MBA colleges. So, why candidates select anyone from the two? There are some of the eminent benefits that both of them offer. So, here is a GMAT vs. MAT in terms of the benefits offered by them.

Here are some of the most common benefits that you can enjoy after you have cracked MAT.

1. Get Selected in the Best B-Schools:

One of the major reasons for appearing in MAT is that you can seek admission in India’s best B-schools. You can select five institutes from the list offered while filling in the MAT form. Thus, you can apply for free in five institutes for your MBA studies or similar other programs.

2. Easier than other Tests:

Another great thing about MAT is that it is much easier than other entrance tests such as CAT or GMAT. The syllabus is comparatively easier, and the chances of cracking through the exam with a good score are much higher for the students.

The exam is conducted 4 times a year in different months. So, you can appear at your convenience. The score that you have achieved in the test will be valid for 1 whole year.

Earlier, MAT was conducted as written tests. But with the technology change, MAT has got changed into an online testing module. But there are still some areas where MAT is conducted in paper form. So, the test mode for MAT is in both the online options as well as offline mode.

5. Good for your Career:

If you have scored well in MAT, you get admission into one of the best B-Schools in the country.

Passing out from a good college will always make your resume much stronger and brighter. This will help you in cracking through the interviews of some of the best companies.

The best institutes also conduct recruitment drives or campus interviews. They invite some of the best companies in the country. You always have the chance to face these companies and get selected while studying in the best B-schools.

After knowing the benefits of MAT, here are some of the important benefits that the GMAT offers to its candidates.

1. Top B-Schools Around the Globe:

After you cracked GMAT with a great score of 750+, you do not just have the chance of getting admission in the best B-Schools in India but also across the globe.

GMAT is an international level entrance test for getting admission in MBA or similar programs. Hence, after cracking through the exam, you can start applying to some of the best B-Schools worldwide, including India.

Many B-schools around the world also offer admission to the students, along with scholarships. Every B-School sets a particular GMAT score to be a criterion for admission.

But if you have scored something much higher than the set score, these B-schools may offer you a scholarship along with admission.

Hence, if you have scored a high score, you can apply to different colleges and then select to get admission to offer you the best options that is a good scholarship program.

3. The Test and Validity:

You just need to keep a distance of 16 days from the last time you appeared for the exam. After you have scored in GMAT, the score is available for five long years.

If you have scored exceptionally in GMAT, it not just helps you in getting through the best B-Schools around the world or win a scholarship, it also helps you post your education.

Some top companies worldwide also get convinced and pleased by the high GMAT score you have achieved apart from the B-school marks you have got.

Which One Should You Choose?

After having a detailed discussion on GMAT vs. MAT, a lot of things have got cleared out. It is not much easier than before to make the decision of which one to choose. Here are some of the factors that you should consider.

● Where Do You Want to Study?

Suppose you are well-convinced that you will study only in India. In that case, you should surely opt for MAT to get admission in the top B-Schools across India.

Suppose you are very much focused on getting admission in an international B-School. In that case, you should definitely appear for the GMAT.

As GMAT is an international level entrance exam and loads of candidates worldwide appear for it, it is quite difficult. But if you think that you will not be able to crack through the difficulty level of the GMAT, you can go for the MAT.

● How much time do you need?

If you are already a student, you will obviously not require much time to get admission to a B-School. For such a situation, appearing in MAT is the best option you have as it is valid for one year.

If you are a working professional and wish to start your MBA studies again, you can go for GMAT as it is valid for five long years.

Thus, there are some noticeable differences between GMAT and MAT. Understanding the details of GMAT vs. MAT will definitely help you in making the right decisions.

It is important to go through the features and factors for both the tests before appearing. Of course, there is no harm in appearing for both of them also.