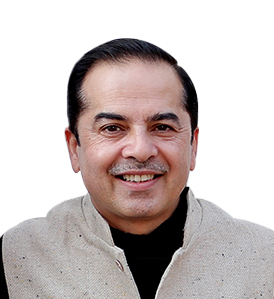 An experienced academician, researcher and academic administrator spanning for more than 27 years. He is one of the youngest to hold the post of Professor of Civil Engineering at an age of just 34 years. Prof. Maneek has served as the Dean of Student Affairs at Thapar Institute of Engineering and Technology, Patiala as his latest assignment. Prior to his stint in Thapar Institute of Engineering and Technology, Patiala, Professor Maneek Kumar has held senior positions like Head of the Department of Civil Engineering for a six-year term (2006-2012) along with multiple administrative positions like Faculty Advisor (Civil), Professor in-charge of Alumni Relations and the President of the Sports and Literary Society during his career.

Prof Maneek has been an accomplished scholar since his pre-engineering days. He has contributed significantly and added to the knowledge in the field of concrete technology and use of sustainable materials in concrete with publishing more than 80 research papers in National and International journals and conferences. He has guided more than 65 M. E. thesis, 14 Ph. D. thesis. His research findings also form a part of a book chapter on concrete technology.

Prof. Maneek has handled R & D projects of worth more than Rs.100.00 lakhs and was awarded the best progress award for the AICTE sponsored R & D Project in the year 2002 and ‘Outstanding Concrete Technologist of the Year’ award by the Chandigarh Centre of Indian Concrete Institute. Spearheaded the project as teacher Advisor of the winning team of students, which participated as the only foreign team in the top eight teams in the International Space Settlement Design contest organized in 2004, under the aegis of NASA and Boeing by the American Aeronautical and Astronautic Society at USA. He was subsequently awarded by many organizations including the Government of Punjab for this achievement.

He is the life member of many professional societies and associations like ICI, ISTE, ASCE (India), MSI, PMA etc. He was the founder General Secretary of the Patiala Centre of Indian Concrete Institute and had also been the Chairman of ICI – Patiala Centre. He is currently the Vice-President of the Patiala Management Association. He had also been a very active member of the first State Expert Appraisal Committee (SEAC) of the Government of Punjab for the period 2007 to 2010.