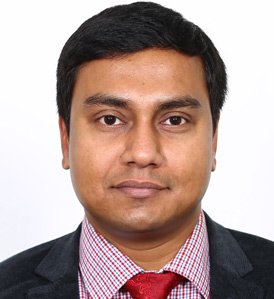 Dr. Soharab Hossain Shaikh is an Assistant Professor at the Department of Computer Science and Engineering, SoET, BMU. He has over a decade of experience in academics and research. He is an ardent learner and passionate about looking for new techniques and applications of Machine Learning and Deep Learning in the domain of Computer Vision and text processing.

He has received his PhD degree from University of Calcutta. His area of specialization is in Computer Vision and Image Processing. Prior to joining BMU, Dr. Shaikh has worked as a faculty member at NIIT University for about one-and-half year. Earlier he was a faculty member at A.K.Choudhury School of Information Technology, University of Calcutta for about six years. Before that, he was associated with two Engineering institutions in Kolkata as faculty of CSE for two years.

He has secured the first rank at University of Calcutta in his Master of Technology programme and was awarded the Gold medal. After completing M.Tech, he received a fellowship from the Italian Ministry of Education for Universities and Research (MIUR) for perusing research at Ca’ Foscari, University of Venice, Italy. Dr. Shaikh is also the recipient of TEQIP financial assistance from University of Calcutta for visiting AGH University of Science and Technology, Krakow, Poland. He has participated in a number of international conferences held in both India and abroad. Dr. Shaikh has also qualified for the National Eligibility Test (NET) for Lectureship.

His area of research is in Computer Vision and Image Processing. He has worked on object detection and categorization and biometrics. He has over twenty publications in international journals and conferences.

Dr. Shaikh jointly holds a US-patent. He has co-authored two books published by Springer. He has also written a book chapter on Gait Analysis in the book New Directions in Behavioural Biometrics published by CRC Press.

Dr. Shaikh has been involved in other professional activities as well. He is one of the guest editors for the International Journal – Springer Transactions on Computational Science, XXV, 2015. He has served as the reviewer for a number of international journals including IEEE Transactions on Cybernetics, IEEE Transactions on Industrial Informatics, Springer – The Visual Computer, IET Image Processing, International Journal of Biometrics, International Journal of Advancements in Technology, etc. He was also one of the committee members for the international conferences – ICDCN-2010; CISIM-2011, 2013; International Doctoral Symposium on Applied Computation and Security Systems (ACSS)-2014, 2015. In addition, he has reviewed papers for a number of internal conferences including ReTIS-2015, CISIM-2015, FICTA-2014, Nostradamus -2013, ACITY-2012 etc. Dr. Shaikh was the invited speaker at Jagiellonian University, Poland; Heritage Academy, Kolkata. He has also delivered a lecture at the Faculty Development Program (FDP) organized by CSE, Government College of Engineering and Textile Technology, Berhampore, West Bengal.

Apart from his professional interests, Dr. Shaikh is passionate about music. He plays mouth-organ and loves writing songs and composing music. He is also interested in digital photography. His favourite leisure activities involve playing football with daughter and going out for a long-drive with family.